The record player was invented a way before CD player, cassette tapes and any other devices used for recording and playing of the sound. If you are a fan of vinyl you will not think that this machine is old and uninteresting, also because it was first a part of a revolution in music like the MP3s in recent times.

Besides those who have nostalgic thoughts, there are many hip-hop figures and DJs who still prefer record players as a tool for music-making, so read on if you would like to know how does a record player work.

Basic feature of a record player

They are crafted in a quite simple way, and many would claim that they are something not much more than wheels powered by the electric motors aid. Magnetism hard drives do the job of reading information and also recording it, and that is why electromagnetic arm goes to read and write microscopic magnetic zones on a continuously spinning record disc. Up and down it sweeps and that is the record player main characteristic.

In most cases the “record player” and the word “turntable”  are used as synonyms in these times, this is not entirely the well-based truth. In fact, turntables are the main technical components of the record players because the records rest on them. “Revolving platter” is yet another name for them.

A metal rod appears in the very center of them, and, as the record turns around the center, the turntable holds it firmly. The plates are mostly made from metal, but they are protected with rubber or plastic because in this way the harmful scratching of the record is avoided.

Some cheapest products got turntable made of steel, but the more costly use aluminum plates, because the aluminum reduces vibration better, and do not, amplifies problems with the speed in the motor.

How does the turntable work? 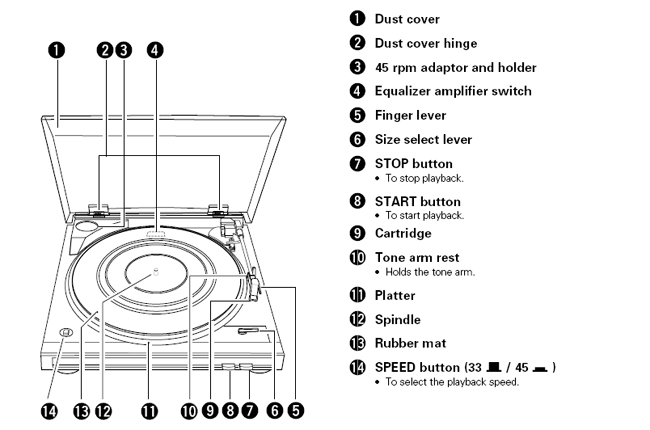 Drive system of the turntable controls rotation. There are two different types of it, and those are direct-drive and the belt-drive type of system. A system which is direct-drive is used for more modern models that got more durable control sliders and motors, and because of this, they are favored by the DJs in the last decades.

The other one uses belts gears and wheels. Belt system is very good at reducing bad noises which can be caused by the motor. The elastomeric belt is the main reason for this because it helps to reduce vibrations and various nasty sounds that are counting among the painful low-frequencies.

Opposing the record you got the needle that rests, and that component of the record player is called the stylus. It is a cone-shaped part crafted from diamond, and that is the hardest known material in this world(in some cases sapphires are also used for needles).

This component is attached trough an adjustable metal strip to the part called tone arm, and the elastic form of it in the center gives the stylus ability to ride back and forth in reach of record grooves.

Two types of this part can be elliptical or spherical. First one is, without a doubt, more sensitive, but it can provide some less fidelity.

The advantage of the other one is in its ability to increase the music fidelity by permitting the stronger contact for the grooves, and that is by some standards more desirable, but regardless of the stylus type, it must be replaced sooner or later.

The Cartridge and the Tone Arm

The arm that holds the previously mentioned part is called the tone arm, and this part altogether with the cartridge actually creates the sound. There are also two kinds of this component, and some argue that curved one is better, others that straight one is their choice. Hip hop guys and DJs like straight one more because of easier scratching.

The grooves are followed by the stylus, but in that process, vibrations go trough the wires made from metal in the tone arm, and all of this end up at the end of it, and that is where the cartridge is. The cartridge has the coils in its own magnetic field, and in the moment when various vibrations clash these coils, then the electrical signals are firmly created in this method of transformation from a vibration to a signal.

The old type of audio receiver always had a phono preamplifier, or, in other words, a preamp. Modern ones don’t possess them, and most record players of today got some built-in types of preamps.

For the right solution to this issue; contact an audiophile or a professional on this matter, but be assured that those guys will also insist that you must buy a truly dedicated preamplifier if you want a fine sound quality.

In a nutshell, a record is placed on the platter. And, within the record grooves, the stylus goes up and down as record firmly revolves, and it also dispatches vibrations along the wires in the reach of the part known as the tone-arm, and toward the cartridge, where they are transmuted into the voltaic signal.

That current goes trough to the preamp which enhances the signal that enters the speaker, and that is the answer to the main question of this review.

What are the Beautiful Secrets Behind the Vinyl Records?

How To Clean Vinyl Records: The Ultimate Guide

The Best Tips On How To Store Vinyl Records

What are the Beautiful Secrets Behind the Vinyl Records?