The guitar is one of the most popular and best instruments to learn today. Knowing how to play the guitar can be a source of increased self-esteem, you can be the star of the night or the life of the party in social gatherings, or it can also be a source of income if you want to go professional.

There are many ways of playing the guitar, the most famous and well-known are the styles of rhythm, lead, and fingerpicking. In this case, if you read further, I will show you the ways on how to fingerpick guitars. Learning will take time, but learning the style of fingerpicking would be worth all your while. 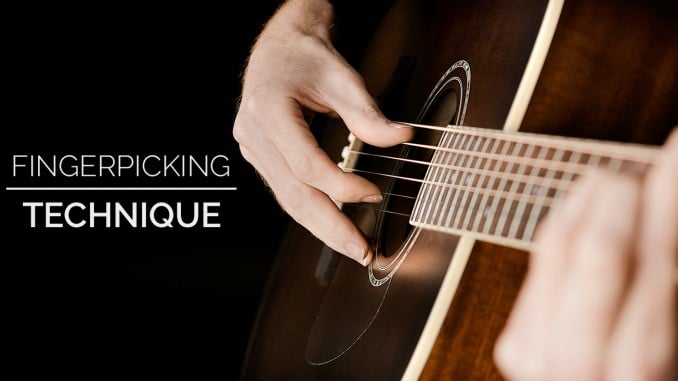 Fingerpicking is a way of playing the guitar, it mainly involves your left hand holding the chords and plucking the strings with your right fingers independently. Fingerpicking doesn’t involve strumming or playing with a pick.

The advantage or distinction of fingerpicking among other styles of playing the guitar is that it gives off the illusion that there are several guitars being played at the same time. This illusion comes from the fact that fingerpicking involves playing bass lines with the thumb and also playing melodies and chords with the other the fingers at once, as well.

Playing the style of Fingerpicking is pretty interesting, isn’t it? It can give you the illusion of being a one man band, where you can play entire songs without the need of other instruments. It maximizes the full potential of the range of notes that can be played on the guitar. Now, let’s take a step further and learn the ways of Fingerpicking.

What You Need to Do before Practicing

Before we begin practicing Fingerpicking or playing the guitar with just any style, we must first check the guitar’s condition. The good condition of the guitar’s parts, the body, neck, fretboard, and strings, are all essential in its function and sound. So here are some tips on checking the parts and maintaining their good condition.

The Fretboard and the body are the parts of the guitar that are the easiest to check. Just make sure that there are no indentions or holes in its structure. To maintain the body, wipe it with a soft cloth and a little bit of warm water every after use. Use the same method for the Fretboard, but cleaning it is only advisable when you are changing your strings.

Speaking of strings, you must clean and change them regularly. They break now and then, especially if you are often playing. It is advisable to change your strings as a whole or sets because if you change only one string, the others will also break in time anyway. And having strings of the same set will give you a more balanced tone.

After checking and finding that your guitar is in great shape, now it is time to check the tune of your guitar. Having a well-tuned guitar is obviously important before playing, otherwise, it will give off all the wrong sounds, and you wouldn’t improve your fingerpicking skills no matter how you practice.

The idea or theory behind a well-tuned guitar is that all the strings give off relatively harmonious tones with each other. The sound that is produced in each string must have the appropriate intervals of lows and highs of tones.

So if you think that the tones and sound that your guitar gives off are well-balanced, then you’re good to go in practicing Fingerpicking. However, if you don’t know how to tune your guitar, you can check at here.

How to Fingerpick Guitar

Now that you and your guitar are ready let’s go and learn fingerpicking! We will discuss the basics first, and then we’ll try to do next level stuff like patterns of fingerpicking.

After positioning your hand, place your fingers on the strings. The top three strings, 4th (D), 5th (A), 6th (E), must only be plucked by the thumb, this will serve as your bass-like tone. The bottom three strings which produce the treble-like tones, 1st (E), 2nd (B), 3rd (G), will be plucked by your index, middle, and ring finger interchangeably.

This pattern uses only two strings. So, to do this, hit a D chord with your left hand, and pluck the open D string with your thumb on the first beat and the G string with your index finger on the second beat. The third and fourth beat is the repetition of the first and second beat, but be mindful of playing this fingerpicking pattern. You must establish a steady and consistent rhythm on playing it.

Now that we have learned a basic fingerpicking pattern using two strings, let’s try a pattern that involves the fingers. Now we will try a piece called “Inside-Out” that is based in 4/4 time. This is one of the easiest patterns, and it can suit any tempo. Let’s also try this pattern in the D chord.

There are still lots of fingerpicking patterns out there on the internet. The point is that you should find the right pattern for your chosen song.

Now that you’re done with the tutorial, you can try the following songs when you’re fingerpicking guitar. These are easy songs especially as a beginner.

Fingerpicking may sound challenging and complicated, but it is quite easy once you try it with your hands and open your ears. The catch is that you have to allow your fingers to get accustomed to the tempo, so you’ve got to practice the patterns time and again. Slow down if you can’t quite make it at first, and then be faster once you mastered it.

You can tell that you have mastered one fingerpicking pattern when you don’t have to think or you don’t have to look to your hands when playing. It is when you can produce the desired result without being strained at the least. It is also advisable that once you mastered a fingerpicking pattern, you must apply it and learn to play a song using it.

Now that we have learned the overall picture and basics of fingerpicking, it is now time for you to pick your guitar and master it. Fingerpicking is an art of playing the guitar, you can only master it by practicing it in actuality.

The goal of this article is to give you an overview and few basics to just help you start on your journey towards fingerpicking mastery. Just be patient and remember that great things take time.